Millions of people love and appreciate fishing. It could possibly be a sport, or maybe for leisure, or a career path. Well, the fact is that all the fun of it comes with achieving success in catching fish. Especially when it comes to their different moves and dives with the water. Some people underestimate the art of catching fish because they might not be aware of the fact that they play as others play too.

Fishfinders are electronic gadgets that are manufactured to identify fish underwater. They are capable of doing this by changing electrical pulses into acoustic energy or sound waves. A transducer is just simply the sonar area of the fish finder. It is responsible for taking signals into the water and then locates any echo to guide you where the fish are.

That time is gone when people used to dangle their poles and lines and hope for the best. Clearly, the importance of this device is undeniable. Arguably, but still, to some extent, it’s true that high-quality fish finder transducers have a better chance of understanding signals. Hence, it would be wise to consider a fishfinder with the best transducer.

Well, you are here to know about a transducer that works for a fish finder. So in order to understand how it works, it would be better to keep the following factors in mind. Most probably, you’ll have a convenient time identifying with these three important devices mentioned below.

Higher frequency transducers have relatively short wavelengths and several wave cycles per second. This indicates that you can see many details but very shallow to in-depth capacity. It’s surprising but it’s true that it can detect a quarter-inch fish. High-frequency transducers are capable of showing a clear picture of the bottom but less depth range. approximately, 800 kHz or 455 kHz transducers work best.

On the other hand, Lower frequency transducers have longer waves but fewer waves per second. It shows fewer details but sufficiently contains more energy. Hence, they can operate to greater depths. The thing is that they are only capable of detecting fish with large air bladders. They do not display clear pictures but function well in ocean depths.

Dual-beam or Quadra beam transducers use multiple elements. Where lower frequencies make the use of wider beams to help in finding larger objects, high frequencies enable you to zoom on the fish below your boat.

How exactly does a transducer work for a fish finder

Almost all the fish finders consist of the main unit and a transducer. In most cases, the main unit is positioned at such a place on a boat where anglers can conveniently see it and use it easily. The main unit consists of a display and a few buttons which are actually used to control the device and set up various options.

A transducer is usually mounted on the bottom of a boat and emits sound wave pulses. It is connected with the main unit that gets all of this information from it. Plus, it displays information in a comprehensible way in the form of images. And, by observing the screen, information about object depth, shape, and hardness would be visible to you.

Undoubtedly, a transducer is the most important part of the system. The display is just there to show all the information that your transducer has collected. It sends pulses and then receives their reflection in order to locate the object which is then shown on the screen. It also depends on the type, as it sends these pulses in a different way.

So, the 2D fish finders mostly have round transducers that also emit round signals which spread as they travel. They are actually good in covering a greater area, but with less detail.

Downscan transducers normally that come with downscan fish finders send pulses straight to the bottom and are rectangular. As a result, a narrower, but highly detailed picture.

On the other side, sidescan fish finders emit pulses to the sides. The downside is about moving slower to get a detailed image. The covered area is relatively large but not as detailed as with the downscan transducer.

All transducers come with piezoelectric elements such as ceramics included in them. These parts vibrate, and then this vibration leads to waves, pulses, that travel through water. So, when the signal is returned when it has been reflected, it then transforms into an electrical signal that travels into the main unit. The main unit software takes it as an input and depicts these signals into pictures.

How exactly does a transducer identify a fish?

A transducer identifies fish by sensing the air bladder. The air bladder is an organ in each fish.  It contains gas that provides an ease to fish in adapting to water pressure in various depths. The best thing is that the gas amount in the fish can be increased or decreased to control the fish buoyancy.

Plus, the air bladder has a different density than flesh or bone. This difference results in the sound waves coming from the echosounder bouncing off the fish. Therefore, the transducer receives echoes. The echosounder recognizes these differences and shows them as a fish. 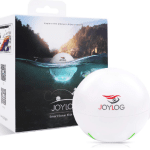