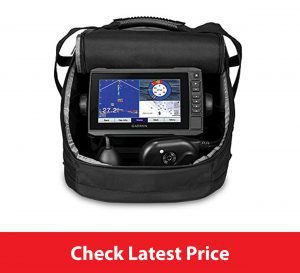 Garmin Panoptix has taken the fishermen community by storm because of its revolutionary performance in challenging ice fishing environments.

What’s more enticing is that it performs equally magically in open water as well, thanks to the killer combination of Chirp technology and detailed mapping.

Big fish or small, with this at hand you’re bound to bring back some prized catches to flaunt in front of family and friends.

A few words cannot suffice your curiosity that’s why we will give you an in-depth review of what this little marvel is carrying that makes it better than the rest.

Panoptix Ice Fishing Bundle is better than traditional flashers and ice fishing fish finders because its sonar covers a vast area promptly with remarkable bottom-coverage and target separation to prevent anglers from unnecessarily digging hundreds of holes in search of fish.

This isn’t for the faint-hearted; at least that’s what the exorbitant pricing tells. Rest assured you’re going to love every second of fishing with it because of its three types of powerful sonars: traditional Chirp and twin modes of Panoptix, LiveVu Forward and LiveVu Down. you’ll notice a revolutionary change in ice fishing because it will search an area of 100ft around you and underneath sheets of ice to locate any fish lurking in the vicinity. No need to drill hole after hole in search of your target. You get a generous coverage with LiveVu Down and notice the activity in real-time with excellent target separation.

It carries a 7” bright touchscreen with intuitive keyed interface to ensure you spend less time tweaking with settings and more on the actual hunt, not to mention you enjoy a vivid view of the world hidden below ice.

Fishing, whether it’s demanding ice fishing or relaxing open water fishing, will always be a fun activity because you’ll always know where you’re going and what kind of terrain you’re dealing with. It is mainly because of LakeVu mapping that contains high-definition contour details of over 17,000 lakes.

All in all it’s not everyone’s cup of tea that’s for sure; but if you manage to buy it it will be money well spent since you’ll get a one-man-show that will leave you speechless with its remarkable performance both in ice fishing arena and open water fishing.

Like a serious businessman, Garmin Panoptix also comes with dedication and effectiveness required to excel in the task it’s intended to perform: locate fish. You’ve to thank its powerful Chirp technology. Unlike regular sonar, this Chirp sonar covers a generous area and garners optimum detail with crisp visuals to help you get a better idea of what’s lying underneath the water surface.

Anglers are hooked with this model of Garmin because of its special sonar modes: LiveVu Forward and LiveVu Down. It comes with a powerful Panoptix PS22 transducer supporting all sonar formats and an internal flasher. Locating fish in a challenging ice fishing setting will seem like a walk in the park because with LiveVu Forward you can get a thorough search of a 100ft area, horizontally from top to bottom, to figure out where your object of interest is hiding.

Forget about digging hole after hole in ice in search of the target. Besides, you’ve the magical LiveVu Down at hand that can cover a vast area at once to help you identify more fish in a short time with excellent target separation. This means, the more you see, the easier it gets to get a breakthrough in your quest.

To make fishing a total child’s play, Garmin has integrated a built-in mapping feature called LakuVu mapping containing high-definition detailed maps of over 17,000 lakes. Here is your chance to gloat and prove your superiority over your peers because these detailed contour maps will keep you educated on the water you’re dealing with to help you navigate to productive locations without delay.

You get to enjoy the underwater landscape on a 7” wide touchscreen display with keyed controls. Not only the view is striking but operating the screen is also pretty simple. Double treat. Apart from that, the unit also includes a portable fishing kit containing, mount, cable, battery, charger, rugged case holder etc.

Some other Great Garmin Models:

Why Should You Buy Garmin Panoptix Ice Fishing Reviews?

Scouting fish location below ice can be a real pain and hours-long struggle but if you buy Garmin Panoptix Ice Fishing bundle, the same challenging task will seem like a child’s play, courtesy of its special transducer supporting LiveVu Forward and LiveVu Down.

Besides, the expensive  price looks attractive when taken into consideration the versatile nature of the unit and portable kit, carrying necessary equipment.

Panoptix ice fishing bundle isn’t inexpensive which can be a major put off for many anglers but there’s no denying the fact that this model is pure awesomeness. Its special LiveVu Forward and LiveVu Down supplemented by traditional Chirp sonar will revolutionize the whole fishing experience, both of hard water and soft water. Any angler who can afford it should buy it without further ado because its presence guarantees a number of big catches before your fishing trip comes to an end. 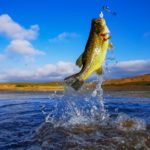 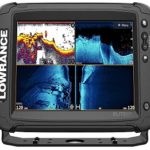 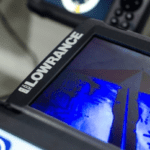 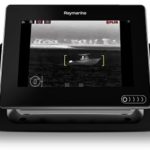 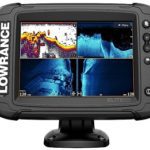