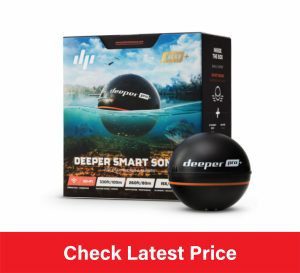 Offshore or shore fishing, no amount of memorizing of water terrain or practice can garner you absolutely accurate location of fish.

100% accuracy is assured only with a fish finder that’s a pro at its job and at the same time smart enough to outwit your cunning finned target.

In this article we are introducing you to the best castable fish finder known by the name of Deeper Smart Sonar Pro+ Plus.

It’s one of the latest additions to Deeper’s Smart series which justifies the rise in cost.

Still, you’ll be astonished to see the vast population of its admirers mainly because of entertaining features like long-range dual beam sonar, GPS, customized bathymetric mapping and wireless connectivity.

Amateurs love it more than avid anglers because it’s setup and operating mechanism is as simple as blinking an eye.

We would suggest you invest in this fish tracker because it promises you successful catches no matter what type of fishing you choose or how evasive the target is.

Deeper Smart Sonar Pro+ eclipses other castable and portable fish finders by its versatility and accuracy. This one can give you an accurate account of both yours as well as your target’s location on almost all kinds of fishing expeditions.

When you’re scouting for smartness and pro-like expertise, for catching fish, in a small fish finder, there’s only one name that we could refer to you with absolute surety: “Deeper Smart Sonar Pro+ Plus”.

Like all good things this one also comes with a price, but lucky for you not as high a price as some other pro-like devices entail.

Don’t let its small size fool you because it can locate targets left and right whether you offshore or inshore.

Hail to its powerful dual beam sonar, you’ll sweep a generous area both horizontally and vertically at once to let you know whether there’s a target within the vicinity or you should proceed further.

It’s a jack of all trades so apart from locating targets the device also functions as your personal sea guide, thanks to built-in GPS.

Not only do you stay on the path due to its internal GPS, but also create charts and maps based on your observations of underwater terrain and fish activity.

This journal containing lucid accounts of your fishing trips are archived in a Lake Book which you can access from the comfort of your home whenever you feel nostalgic or share it with friends and family.

Oh, and the device also employs wireless connectivity. Another content moment as it relieves you of the inconvenience of lugging internet devices, cables and related junk on-board.

Purchase it because it will not strip you of a huge amount of money yet reward you with a man-of-all-seasons kind of fish finder to ensure you come back victorious from every fishing adventure.

Deeper has named this model Pro+ for a reason. It’s better than a pro at sensing the presence of a fish no matter how far or deep it is from your position.

The unit features powerful dual beam sonar that can spread as far as 330ft horizontally and delve 260ft below the water surface to make you aware of the productivity of the spot.

Structure, fish, weed, reef and other objects all will be revealed with such clarity that you’ll instantly know where your best shot is.

Another noteworthy characteristic of this model is its wireless connectivity. I would call it the highlight of this model as it saves users from a lot of hassle.

No need of carrying the additional weight of internet-related equipment and cables. Simply sync it to your phone, throw it at a distance and you’ll be ready to catch your first target of the day before you even know it.

The unit is compact and portable which is evident from its tennis ball-like shape and size. So carrying it on kayaks and small canoes will never be a problem. But, what really bedazzles the audience is its versatile nature.

As mentioned earlier, it’s a jack of all trades. So when the time comes it can transform into a guide to help you conveniently navigate through any water terrain, courtesy of high-sensitivity GPS.

In addition, its bathymetric mapping allows you to sketch personal maps based on your scrutiny of the bottom landscape, fish spots, weeds, rocks and other objects.

You can create a fishing journal containing these details along with snapshots and save it in Deeper’s Lake Book – for reviewing or sharing with friends.

Why Should You Buy Deeper Smart Sonar Pro+ Plus?

Despite being a portable device, the Deeper Smart Sonar Pro+ Plus possesses the strength and power of some high-end models to deliver accurate locations of target on any kind of fishing venture.

Secondly, for a castable fish finder, it offers an astounding casting range, accuracy and speedy performance.

Finally, its wireless connectivity coupled with built-in GPS and chart plotting make it a reliable candidate for a plethora of fishing scenes.

True to its name, Deeper Smart Sonar Pro+ is a pro at finding fish, no matter how small or big it is or how deep or close to the surface it is swimming. It’s a bit costly compared to other portable models but nonetheless the best fish finder for offshore and shore fishing. Anglers and beginners all are advised to buy it because such unerring performance both in sonar scanning and navigation is a rare occurrence in castable fish finders. 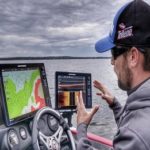 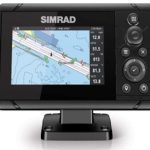 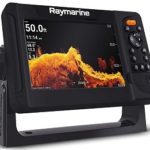 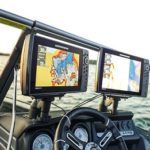